One of my favorite things to do is explore and investigate old legends; stories that have been passed down throughout the years about hauntings.  When the legend of Maiden Rock came into my radar last year?  I just knew the SIM Crew would have to investigate this centuries old legend.  It takes place on Lake Pepin, which is a widening of the great Mississippi River, on a 400 foot high bluff.  The area is beautiful, the bluff is a landmark and does indeed stand out among all of the beautiful Mississippi bluffs.

A beautiful young Native American Maiden, in some reports she is the daughter of a chief, was heartbroken.  Her parents were forcing her into arranged marriage with a man from another band who was a great warrior; but the maiden did not like him, in fact?  It is said she despised him.  In some versions, it is also told that she was in love with another man.  The sad end result though is always the same.  Rather than marry this man her parents promised her to, she flung herself off Maiden Rock, but first she sang her death song. Again, in some versions of the story, her family heard her sing, saw her on top of the bluff and ran to try and stop her from jumping, but she saw them getting closer and jumped.  I guess she felt death was preferable to spending her life with a man she did not love. This story has been told for centuries, passed along from the local tribes to the first white men in the area, and on down.

Today, stories tell of her ghost continually leaping off the cliff.  Some have said that they can hear her singing her death song to this day.   f course I don't doubt the reports of the ghost sightings, what I wonder though is could it be a residual haunting? The awful anguish she felt and the energy left behind from her jump could be just replaying all time, or could it be that the Maiden did not find peace after she leaped to her death, and is still jumping off that rock?  Sad?  Yes.  Honestly, I hope it's residual and not intelligent; because if it is her, it's a double tragedy that she has not found the beautiful afterlife.

At any rate, last fall we drove to the bluff.  We parked at the base, as the trail to the top is not passable after dark.  It was difficult to investigate; a lot of road traffic making it nearly impossible.  But we did hear a sound twice that we can't identify.  I also felt a lot of supernatural energy there.   An abundance of spirits no doubt as this historical locale has seen many deaths I'm assuming.  We did put together a video, below, documenting that initial investigation.

About six weeks ago, we went to the rock again.  This time four of us hiked the deer trail to the top, what an amazing view!  And what amazing energy there on top of Maiden's Rock.  The wind was strong, so strong our voice recorders registered that and nothing else.  When any of us walked too close to the edge the wind stirred up and blew us back away from the edge. Was it the Maiden forcing us back so that we wouldn't suffer the same fate as she?  It happened many times.   When we asked questions the wind would also pick up in intensity, almost as if they were angry we were asking.

There was a point in the investigation where I had my arms outstretched asking for someone to touch me, and indeed, I did feel something brush against my right hand.


Now of course all this is personal experience; we captured no evidence, but the supernatural energy up there was crazy and wild; abundant and remarkable.

The Santee Sioux Nation in Nebraska whom we visited a couple weeks ago, are descendants of the Maiden.  In Santee, there is a bluff, similar to Maiden's Rock, that they named Maiden's Leap in honor of her.  The photo below is all of us at the base of that bluff. 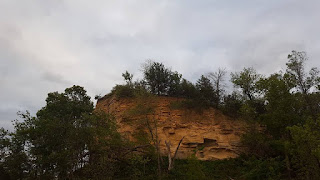 We will return once again in the coming weeks to do an overnight investigation; after midnight when the traffic slows and it is quiet.  I hope to capture some evidence, and you can bet I will share it right here!
Posted by Stephanie Ayres at 7:27 PM