A Spooky Place in the Woods

Recently Kacie and I made our yearly trek to our favorite place; beautiful San Juan Island in Washington State.  We have been making the journey for almost 20 years to see the whales and our human friends.   Over the past two years, stories have come to us about a mausoleum back in the woods on the northern end of the island.  Islanders have regaled us with stories about ghosts flying around the mausoleum after midnight.  We've heard this from many people, and though I'm not sure I believe in flying ghosts, I do believe every story has a smidgen of truth to it ;)

When we were there in 2011, we hiked the trail to mausoleum, in fact I wrote a post about it,see  http://seekingghoststhestories.blogspot.com/2011/07/spooky-mausoleum.html.  The path to get there, winds though a very old graveyard where people who lived in the 1800's/early 1900's are buried.  Spooky?  Absolutely, and the graves in many cases are surrounded by rod iron fences, which makes them look crazy creepy.  About a mile up the trail, and then down the trail, is an unbelievable structure that is known as a mausoleum.  It is actually breathtaking, and in the light of sunset?  It glows, which gives it it's name, "Afterglow Vista."  I had no idea something as amazing as this was there.  Well now we did.  We were awestruck, and after poking around a bit, we were determined to go back at night sometime. 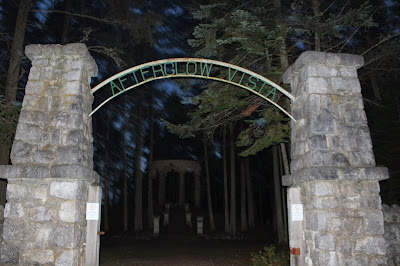 This year in September, we did just that.  After dark, we arrived at the trail, and we hesitated; it was dark already, and we knew it would be darker still in a few minutes, and of course, I forgot a flashlight.  No chiding, yes I know, as a ghost hunter?  I should always be packing a flashlight.   We knew that it was a distance through the now darkened woods to the mausoleum.   Kacie and I wondered if we should really do this crazy thing without a flashlight?  But then, three people came out of the woods on the mausoleum trail.   Well if they can do it, we can too we thought, and after a few words with them, and a look like we were crazy to go back there without light (they had a small flashlight) we trekked on.  We walked and walked, finally, we found the rod iron and stone archway just steps from the mausoleum.  We stood there, once again in awe of this magnificent structure. 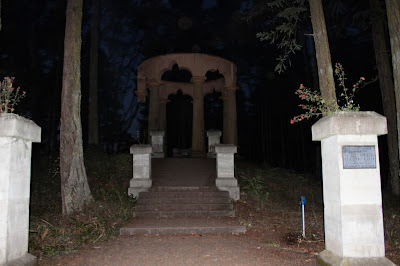 "Afterglow Vista is a little scary" is what I was thinking as I took photos with my phone.  Kacie had the big camera and was shooting lots of pictures.   Finally, we walked up to the Mausoleum.  It is built with pillars that are exactly the same as the pillars that were on King Solomon's temple, with an unfinished pillar and all.  In the light of day it is spectacular; after dark it is, well, spooky. 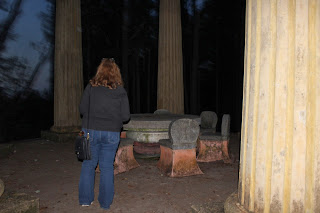 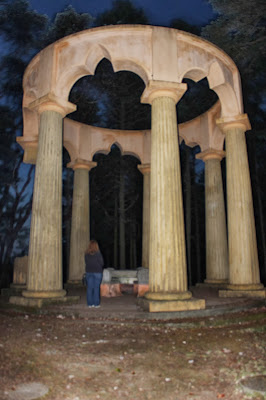 Inside the mausoleum there is a big stone table with six chairs around it;  it was eerie, especially so because each of those chairs holds the remains of one of the family McMillen, including John McMillen who built the mausoleum as a memorial.  He built Roche Harbor, and produced an abundance of Lime from this little island.  You can still see some of the old lime kilns around the island, and I'm told that all the trees at the beginning of the 1900's were used to fuel the kilns used to produce Lime.  I think what a terrible misuse of trees, it? is sad. 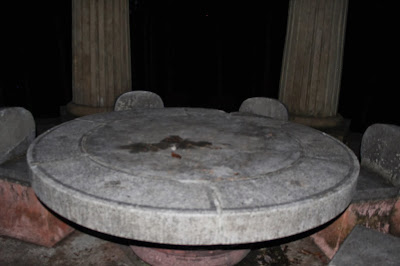 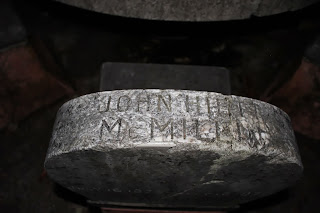 I'd be lying if I said I didn't look for those flying ghosts.  But nope.  I didn't see any, not that I truly expected to see them.  Someone had told me that it was after midnight that they flew - well, we were NOT going to stay in that creepy mausoleum for several hours, and we knew we couldn't stay long (it was past hours to be there).  I turned on my voice recorder, put it on the table and asked a few questions to any ghosts that might have been around.  Kacie continued on her photo shooting journey, and after a bit we began our way back out of the woods.

By this time it was even darker, and I couldn't see more than a foot in front of me.  Kacie took my phone (it's one of the giant Samsung Note 2s) and turned on the video mode for the little smidgen of light to help us pick our way out of there.  At one point she turned the phone me just as I was looking off to my side and I saw what I thought was a critter of some kind and of course?  I screamed a little "what is it"  Kacie asked then I realized, it was my shadow, and I said so.   I've included the video for you to laugh with us below ;)


We finally arrived at the safety of our car, our adventure was complete.  My recordings were inconclusive, but hey, this was not an investigation, we really just had a very quick visit in the dark to find the flying ghosts.  Next time? I guess we will go AFTER MIDNIGHT, and this time?  With a flashlight ;)
Posted by Stephanie Ayres at 8:01 AM