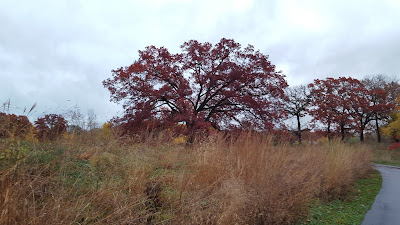 The veil between the worlds of the living and the dead is thin now; possibly the thinnest I have experienced since I’ve been traveling this amazing supernatural journey.  The plants are dying; the colorful leaves of trees are dying and they are falling, falling, falling; amazing and beautiful actually.  Mamma Oak is decked out in full fall attire; her leaves are a brillant deep red.   She is preparing herself for the long winter ahead, soon she will release the leaves and welcome back to herself the energy that they have used, nourishing her over the cold and dark months that are coming.   Oh yes, and then there's snow.  Yep, I have been seeing the first snow of the season right out my window as I write this post today.﻿﻿﻿﻿﻿﻿﻿﻿﻿﻿﻿﻿﻿﻿﻿﻿﻿﻿﻿﻿﻿﻿

My beloved beautiful owls have returned from their summer getaway, and I am delighted that are safely back in the woods near me.  They are very special and they bring me great joy and I believe?  Much protection from unseen visitors, this pair.  Pictured at the right, mom's in the top photo, dad's in the bottom.  I believe that owls have great supernatural abilities, and when I am out walking and I hear or see them, I instantly feel at ease, just knowing they are there; it is truly a feeling of comfort and great happiness.  I am drawn to these owls, and I believe they to me; they have given me gifts over the years, ah but that is another story.

﻿Over the past few weeks I have been seeing ghosts and shadow figures fly by at alarming numbers while walking with my Duncan after dark.   Seeing and feeling all these visitors from the other side of the veil, is it spooky?  A little.  Unnerving?  YES.  The dark out measures the light and so thus I really have no choice but to walk in the dark and experience all the activity that is present.  I really do feel quite out of sorts, why is this?  Well, while I do believe the veil is thinner than I’ve experienced it before, I also believe that my abilities have become greater than they ever have been.  It seems that over the past year I’ve opened the door just a little bit further, and honest?  I feel like maybe I would like to close it, but I wonder, is that even possible?  Probably not.

As a paranormal investigator, this is the best time to investigate.  We always have a full plate of investigations, but this past weekend, just for us, we took some time an visited the wondrous Maiden Rock, a large bluff overlooking Lake Pepin/the Mississippi River.  We hoped to catch the ghostly image of the young Dacotah Maiden said to haunt the area.  The story goes that this Maiden leapt to her death (400 feet below) from the edge of Maiden Rock centuries ago rather than marry a man she didn’t love; a man her family promised her to.  Alas, she was in love with someone else, and she saw no other way out.  The local lore is that you can still hear her singing her death song as well as see her apparition leaping from the cliff.  The whole story is sad beyond belief, just thinking that she is still there reliving her death over and over?  It is simply TRAGIC. 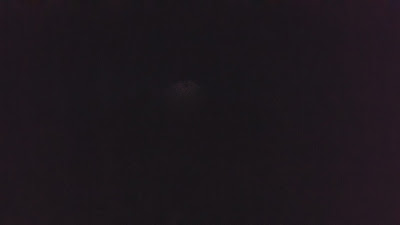 Five us made the trek to Maiden Rock last Saturday; Kacie and I got there just before sunset and tried to hike the trail to the top of the cliff, but we didn't make it to the top of Maiden Rock.  We were losing daylight and the trail wound up and down through heavy woods.  For safety, we had to retreat.  We went back to the bottom of that big 400 foot cliff, and we investigated.  We saw LOTS of darkness, as you can see the photo above;  if you look closely at the upper half of the image you can faintly make out the rock;  the image below image is just our flashlights, looks a little eerie so I thought I would include that.  People always ask me what we see when we are investigating, well, this is it.  Lots of darkness to be sure ;) 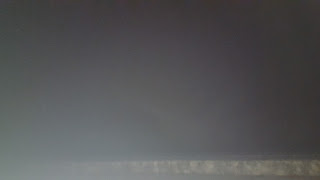 We were not disappointed, there was without a doubt supernatural activity there.  We were able to capture some voices on EVPs, and a crazy unidentified noise that happened twice, that we all heard just after asked questions.  And,  I believe I heard a woman singing from somewhere, several times in fact; however, it was faint just like it was on the very edge of my hearing.  Was it the maiden?  I have no way of knowing, of course my romantic self kicks in here, and I would LOVE to believe it is.  The investigator in me of course says "not so fast sweet pea".....it is a constant struggle.  Most certainly, I want to go back again because there was just enough activity and evidence that makes me thirst for more.  We will schedule a return trip to this most beautiful place SOON.  I just have to know if she is still there, or if what we felt and heard are the spirits many others who have died in the area.  This place?  FILLED to the brim with history dating centuries back.

I will close out this post by encouraging you to enjoy this time of year, and keep in mind that that little shadow in your peripheral vision?  Just may be a someone from the other side ;)  Oh, and of course?  Happy Halloween, this year why not set an extra place at your dinner table for those in your family who have passed; it will be appreciated.
--Steph

Posted by Stephanie Ayres at 7:44 PM

Last weekend we were at ParaCon, the big paranormal convention held yearly in Mahnomen, Minnesota.  It is always an amazing experience, this year, made even better because our friend Jen who is a very gifted Psychic Medium/Reiki Healer was in the booth next to ours.  Over the course of the two days, there were several times Jen would motion me over to her booth while she was working her magic on someone, so that I could feel the energy flow.  Amazing? Yes.  It felt warm, even hot, electric and and I could feel it stretching a couple feet up and sideways. Think of stepping into a warm bath, or the warmth of the sun on a cold day - that's how it felt.  It also felt like it was fluctuating becoming bigger and brighter.  Although I am no stranger to feeling my own energy, this?  Was simply astonishing and exciting. 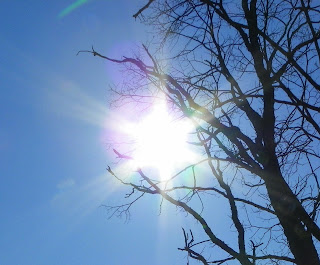 In the afternoon of the second day, Jen came and asked me to come to her booth and help.  The client she was working on has a daughter who disappeared over a year ago, and she has not been found.   Jen told me that she is dead, a dark circumstance, and she wanted me to ask to be shown where her body lies.

Jen indicated that I should sit on the chair, gave me pen and paper, and told me to ask to be shown where this girl can be found.  If I received any answers at all I was to write it all down.  Suddenly I felt the shiver of spirit and knew that the daughter was with us even before Jen confirmed it.

I closed my eyes and tried to communicate and meditate; no easy task when there is so much hustle and bustle going on all around, but somehow I managed.  Then I saw complete blackness; after a few minutes brilliant purple came into view.

I thought “weird, wonder what that means” and then with activity that is ParaCon happening all around me, my concentration was broken.

I sat there for a bit thinking about that purple.  I stood up and I told Jen that I all I had seen was the dark and the purple; she nodded and showed me their notes.  And there it was; the color purple was written at the top of the list.  Had I been shown this by the missing girl?  Maybe, and it made me feel crazy weird – I couldn’t fully focus for a while, except on the weird feelings I was having.

Back at my booth I couldn’t shake it, and I thought about all that had transpired.   Can psychic ability be learned?  Or is it something that goes hand in hand with intuitiveness, and one can learn how to use it?  Awaken it in other words?  I have no idea – but what I do know?  It was a phenomenal experience, and I am grateful to Jen for giving me the opportunity to be all that I can be.

Later that day when things were settling down, I asked Jen where she thought this young girl was.   She told me that she believes that this girl is in a lake, underwater not far from the shore resting in the silt of the lake under a boat, and that the girl has something purple. So it all makes sense now; the darkness I was shown could be the underwater world of being in silt and under a boat and the purple?  Either something she has or  had.

Difficult to discern just where she may be, but I do hope they find her soon.  She and her mother needs that closure, and perhaps then, she can rest in peace.  Of course should I find out that she has been found?  I most certainly will report back.
Posted by Stephanie Ayres at 10:03 AM