In October the SIM crew took to the road and investigated a property we believed to have supernatural activity.  The property is a large, 110+ acre affair with several abandoned buildings set back in the woods thick with birch and conifer.  The place is ripe with history, but to tell any of it here I would have to divulge the name and place, which I won't do.  We were allowed on this property for our investigation only if we agreed to keep the location, name, and nearby towns confidential.  What I will say is that my husband Jerry's father grew up nearby, and it was this connection that brought us there.

We had five members of the SIM including me on this wild and woolly investigation.  My daughter Kacie, one of our crew, opted to stay at home and care for our three cats and dog while we were away.  The property is enormous, and I remember wondering just how we would tackle an investigation of this magnitude while we walked around it in the day. 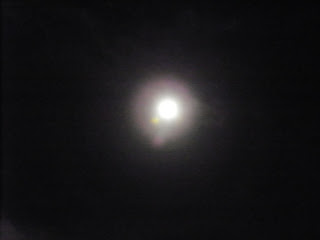 Well, we arrived on site around 9:00 that evening.  It was a chilly 38 degrees, the sky was clear and the moon was bright and almost full.  It was just a week until Halloween, that time of year when the veil between the living and the dead is at his thinnest.  With the full moon, and the big trees looming all around us it was a perfect night for a ghost hunt.  It was quiet back there in the woods, and I thought perfect EVP conditions.
We began by setting up our equipment.  The first event happened shortly after we arrived.   While Katie and I were setting up night vision video recorders in one of the buildings, Jerry came quickly in, exploding with excitement, and said that while he was setting up another infrared video recorder in another building he saw a shadow move past him.  Attributing this as a paranormal presence, he was quite worked up (as I would be), but by the time we got there with him it was gone, and wouldn't return to us that evening.  Too late.

All of us had personal experiences during the investigation.  As a sensitive, I knew there were spirits watching us there.  In the building where we had set up two night vision video cameras I know there was someone in the corner. We heard knocking and I physically felt a presence there.

Several times as I moved about outside from building to building I felt that odd, heavy, electrically charged feeling of paranormal presence near me.  I felt that the site is definitely the home of otherworldly spirits, why are they there?  We always ask why, but we never will know the answer.  I do know that it is place of great history and thus they could be spirits of Native Americans, early settlers, even passed over people from a more modern time.   Spirits from any and all of these categories of peoples are certainly possible.  What were their stories?  I'd love to know, but in all probability we will never know.  You know as a history major, I've always been fascinated by old stories.  The world of paranormal investigating is really finding stories in the end isn't it?  Well, I'd like to think so anyhow.

While we were investigating in one of the buildings, we felt sure that there was a paranormal presence with us. Jerry asked it to repeat a number he had softly spoken into his hand, inaudible for the rest of us. I distinctly heard a soft raspy voice clearly say "4", and afterward I asked if 4 was the number. Jerry was shocked and I stated I had heard it clearly. When we listened to our recording, it was there, without a doubt. Apparently it also wanted us out of there as we also hear "get out" on the recording as well.  It was in this same spot that Katie, Jerry and me all felt the presence of a spirit.  The two photos below tell the story clearly.  One minute there was nothing there; the next the space was filled with orbs, as if a ghost was trying to manifest.﻿﻿﻿ ﻿﻿﻿﻿
﻿﻿﻿

When we interviewed the property owners, they told us about the "Murder Road".    They called it that because a man who was murdered at the edge of the property on a road there but didn't have any further information.  We asked Jerry's dad about this story, and he told us what he remembered, and the tale follows.  ﻿
﻿Seventy plus years ago, a man who owned a farm near the site kept sheep and one race horse.  This man also had military background, and the locals say he was crazy in the head.  The man was good with a gun, you might call him a sharp shooter, and he would shoot animals in the distance just because he could.  A very mean and vulgar individual, he would leave the animals to suffer terrible deaths.  He would also take shots at the kids walking by, and they all knew not to go any closer than about a quarter of a mile.  One fateful day, this ex-military man lost his mind.  He shot his friend who was coming to visit between the eyes on that road and killed him.  After he killed him, he went back to his property, confessed to the sheriff what he had done and proceed to slit the throats of all his sheep, killing them in a bloodbath.

A crazy and most deadly happening to be sure, and we have been unable as of yet to find true documentation of this story.  I am hopeful that we will have some time to check out the local historical records next time we are up that way, so that we can hopefully substantiate the story.

After hearing about this "Murder Road" two of our investigators, Mae and George, decided to walk out on that road at the start of our investigation.  With the light of the moon leading their way, they walked to the end of the road and were placing their night vision video camera when suddenly they heard horse noises, like heavy blowing and foot clomps.  They feared they would be trampled the sound was so near and so real.  Thankfully nothing happened to them and though they discovered a fence, they found no evidence of any horses or other hoofed animals.  Could this be the ghost of the race horse that belonged to the crazy military man?  It definitely falls in to the weird and unexplainable category, and we don't know with absolute positivity whether this horse they heard was real or phantom, but it's quite intriguing experience on this investigation.

EVIDENCE ANALYSIS, REVEAL AND MY CONCLUSIONS

It was a fabulous investigation, and we had a lot of experiences.  When we analyzed all the data we found several voices in various parts of the property.  Some in answer to our questions, some just stating something, and some that we feel is a voice saying the same thing over and over again voices indicating a second type of haunting as well, one that is termed residual haunting.

We had left a voice recorder in the first building we entered and did EVP work, that honestly, I had no inclination of a supernatural presence in.  Boy was I surprised at what we found on the recording!  Constant moving around when the space was empty, footsteps, closing of doors, and a voice that says "LISTEN".

All in all this investigation was definitely one for the books.  It was exciting and very interesting, especially the story we heard about the murder there early in the last century.  The two property representatives made me feel very welcome there, and I enjoyed the gals coming along with us on our hunt for the supernatural.

We revealed the evidence in late November to about a dozen people.  We have been invited back and are looking forward to another hunt there next year and I will definitely be spending a little more time in that one building where we caught all the activity on our recorder.  Who knows?  Perhaps that's the most haunted of the bunch!

The official field notes will be published on http://www.siminnesota.com/ soon, so check them out!