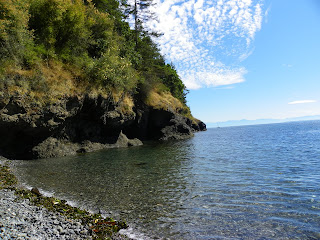 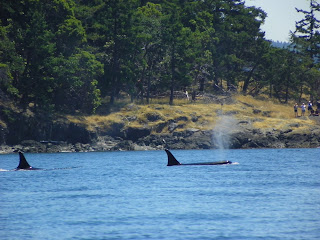 San Juan Island, Washington. It is a beautiful, magical place teaming with wildlife, forests, and history. Our family travels to this slice of heaven each year. We are captivated by the Orca whales who call this place home. To us, this is the only place to vacation, and we enjoy sitting out on the west side of the island, waiting for the whales. They are magnificent, and we fell in love with them over 15 years ago on our first visit.
﻿
﻿

Earlier this week, Kacie and I returned from our beloved island, and while we were there we checked out a spooky old mausoleum that we had learned about, but never seen.  For many years we have heard about the Afterglow Vista from a lot of islanders, including our friends Gayle and Hugh. Tales of  ghosts materializing after midnight and cruising the place as well as well asother otherworldly events abound.

I have to share a little history of the place, it is quite interesting. John S. McMillin, an industrialist, came to the island in the late 1800's and bought a company that mined the pure limestone once in abundance on the island, "cooked" it in ginormous kilns, and then barreled it, and shipped it off to distant places worldwide to be used as a strengthener in concrete and mortar.  After the San Francisco earthquake in the early 1900's, most of that city was rebuilt using the island's lime in a concrete mix that is stronger than the normal concrete and mortar. 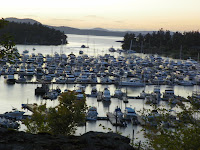 John S. McMillin built Roche Harbor Resort which is quite the place, and today it is lavish with every amenity available. As he was becoming an old man, he decided to build a mausoleum to house his and his family’s ashes after they died. 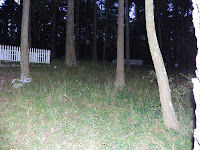 Today, the old cemetery on the hillside and the mausoleum is open to the public, and so Kacie and I made our way up to the exclusive resort and found the trail marked “Mausoleum”. We parked in the lot and began ascending the hill on the twisting and turning trail that lead us through the very old cemetery, where almost all of the graves date back to the late 1800’s. We arrived just as the sun was beginning to set and the woods were dark, the sky above was still light and streaked in the beautiful colors of the sunset.
It was, well, eerie walking through that old place. Each grave was surrounded by either a picket or wrought iron fence; some of the grave sites held an entire family. The tombstones were cracked and falling apart; some of the graves had trees now fully grown inside the fences. We stopped at one of the large gravesites, and I could feel a presence. Kacie could also feel this spirit, and though we had only our cameras, Kacie took her cell phone out and hit the record button. We did a short evp session, but we knew that chances of catching anything were slim as the big resort was ending the day with the big daily ceremony performed  when taking down the flags at sunset.
We couldn’t find any kind of building, and it was after sunset and quite dark when we climbed down the hillside and left the area. Photographs we shot show various orbs which indicate paranormal activity, but all in all no concrete proof, no ghosts flying overhead for example. 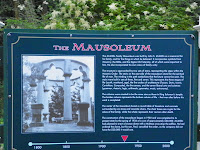 The next day after talking with our friends, they told us that we hadn’t gone far enough, so the next night we went up and on the trail we went. It was about a half mile trek from the end of the old cemetery to the mausoleum, and worth every step. This place is unbelievable, and so surprising. Who knew? We go to this island yearly and never knew that this masoleum was so grand, well we had heard stories of the place but we never expected it to be quite as, well, unbelieveable as it is.  We were quite amazed to say the least. A big pillar old world looking structure stuck way back in the woods. Can I just say -- CRAZY? Well, it is, but also quite otherworldly. 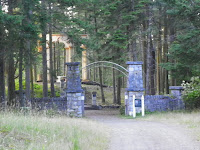 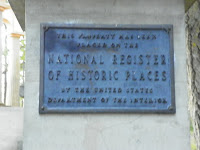 Old man McMillin built this structure with pillars built to the specifications of King Solomon’s temple from the Bible; one of the pillars is broken, indicating life’s unfinished business. Inside the structure is an enormous round limestone table with limestone chairs surrounding it, one for each family member; inside the base of the each chair is the cremated remains of the family McMillin. Creepy? Oh ya, but very, very interesting. The sun had set by this time, and so we shot several photos, some in this blog, and made our way back through the woods to the car. 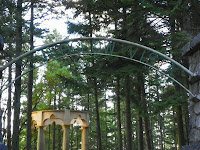 An investigation of this amazing dedication to John S. McMillin’s family as well as the old cemetery would be awesome to do. The ghost stories of this place are many and as with all stories, there probably is a small slice of truth to them. We did feel a presence in the cemetery and our photos show paranormal activity, it would be phenomenal to investigate there. 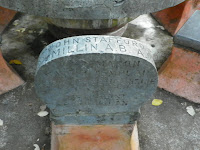 Perhaps the owners of the resort would welcome an investigation.  The SIM Crew would do an awesome job, I have no doubts.  You just never know, the summer of 2012 may be Afterglow Vista's very first paranormal investigation ;)
﻿﻿﻿﻿﻿ ﻿﻿﻿﻿
For more detailed information about this historical landmark, you can click on this link: http://sanjuanmasons.com/mausoleum.html 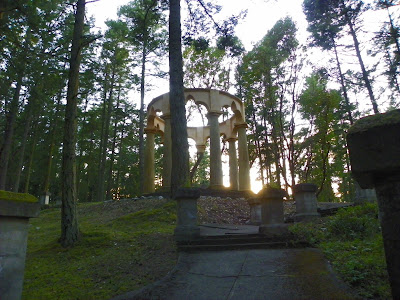 Posted by Stephanie Ayres at 3:25 PM